In today’s world, don’t we all crave for admiration and how to achieve it?

A research company by the name of “YouGov” has published a list of the most admired individuals of 2018 and has ranked several personalities based on opinions of 37,000 people from 35 countries. “YouGov” divides the polling into separate male and female categories.

The research was conducted by interviewing 37,000 people online. It was finalized on the base of their responses to two questions:

The man who topped the list is a person who started a tech company known for its ruthless ways which makes load amount of money and then spend the rest of your life doing great philanthropic work, yes you’re right, he’s Bill Gates, Microsoft co-founder, has been named in an annual poll as the world’s most admired man.Gates has topped the list in all three years since YouGov divided the polling into separate male and female categories.

In the women’s section, Angelina Jolie topped the list who seems to have switched jobs from being an actor to a more serious role as a humanitarian. She has topped the list in all three years like Bill Gates.

Only two Pakistani people have made into the global rankings, and they are Imran Khan and Malala Yousafzai. Have a look at them below.

Bill Gates and Angelina Jolie are the most admired man and woman in the world, our new 35-country study finds. Barack and Michelle Obama are second in each category, while Jackie Chan and Oprah Winfrey come third https://t.co/RzfYg4DJB8 pic.twitter.com/quXFXQ0KU0

YouGov has also classified its research level according to country-wise. This shows which person is admired the most locally.

In Pakistan’s case, Maulana Tariq Jameel has topped the men’s list while Bilquis Edhi, the wife of late philanthropist, Abdul Satar Edhi has topped the women’s list. Surprisingly Imran Khan came third and Malala Yousafzai came at the 6th number in the local ranking as you can see in the image below. 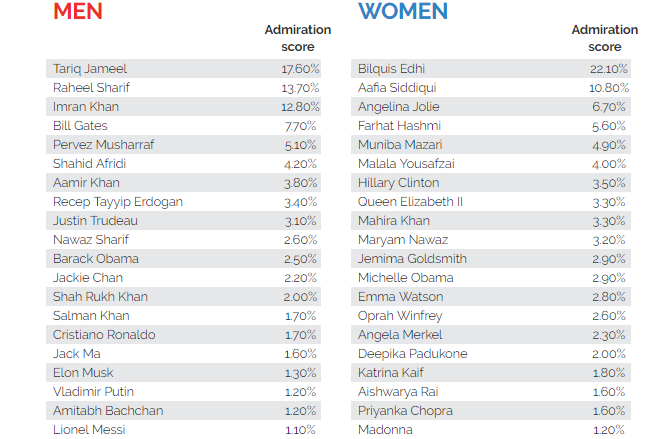 Do you agree with YouGov’s list? Let us know in the comments below.

This picture of SRK’s daughter Suhana Khan posing with a friend...

This picture of Shahid Kapoor laughing at daughter Misha’s antics is...

Sarfraz in an oasis of calm amid World Cup chatter

Xiaomi reports an increase of “2700%” in sales year over year