Fortnite is a game which has a 100-player fight to the death environment that’s getting smaller over time. The game had already been released for App store, and Apple users have been playing it for a month now. The game supports 3 generations of Apple iPhones, from iPhone 6s/SE to iPhone X. This means that older flagships of the Android world might also support this game going back till Galaxy S7 or LG G5. The blog post reads,

“Fortnite is coming to Android. We are targeting this summer for the release. We know many of you are excited for this release, and we promise that when we have more information to share, you’ll hear it from us first.”

It is likely that the Android version of “Fortnite” looks exactly like the iPhone version in terms of graphics and control.
As you can see on an iPhone X below, the controls are represented as virtual buttons on-screen. Hopefully, it will be the same insane game you can play on PlayStation 4, PC, Mac, and Xbox One. 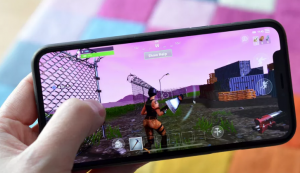 However Epic Games has not said as much specifically, it is likely that the Android version will be free of cost to access like all the other versions. Fortnite on iOS is earning more then all the mobile heavyweights like Clash of Clans, Candy Crush Saga, and Pokémon Go on a weekly revenue basis, earning $6.4 million in just seven days compared to Candy Crush Saga’s $5.8 million beating all the previous records of mobile games.

‘Never felt like we were away from home’ – Shakib

Isn’t it shocking no one has offered me dance film yet,...