Skype will now let you send texts from your PC or Mac via synching your mobile device with your laptop or PC.

The popular video-conferencing app – Skype has been one of the most used application on the Android platform. Good news for Android users is that ‘Skype preview’ is coming on android which will soon enable users to send and receive SMS messages on their Android devices via Skype for desktop.

Android users have always suffered from the absence of a seamless well-integrated ecosystem unlike Apple’s flawless environment which perfectly facilitates its users across all devices. Unfortunately, Android users have not been able to enjoy that well-integrated environment. However, things might change with the new Skype feature, “SMS Connect” which will enable the users to send and receive messages from their Skype app installed on their Mac or PC.

New Update to roll out soon

According to Microsoft, this new feature is gradually rolling on the Android devices for the Skype preview app. However, the users will have to wait for the roll out to complete if they want to use “SMS Connect”. As soon as the rollout is completed users will be able to pair their Android devices with their PC or MAC. Once that’s done, they will be able to text from Skype on Desktop. Once the testing phase of the rollout is completed, the feature will then make its way to the Android version of the Skype app.

OnMSFT has reported that the update is rolling out 8.29.76.16 version of Skype. In addition to this other feature such as Encrypted private messages and call and call-recording have already started featuring on the app. The director of design of Skype and Outlook, Peter Skillman in a tweet guided the Skype users on how to activate these features on the app. According to his tweet:

Once recorded or the call is finished, the recording will be posted in the chat which will be accessible for 30 days. The recording can also be downloaded within that 30-day time period. If anyone wants to access the new features; 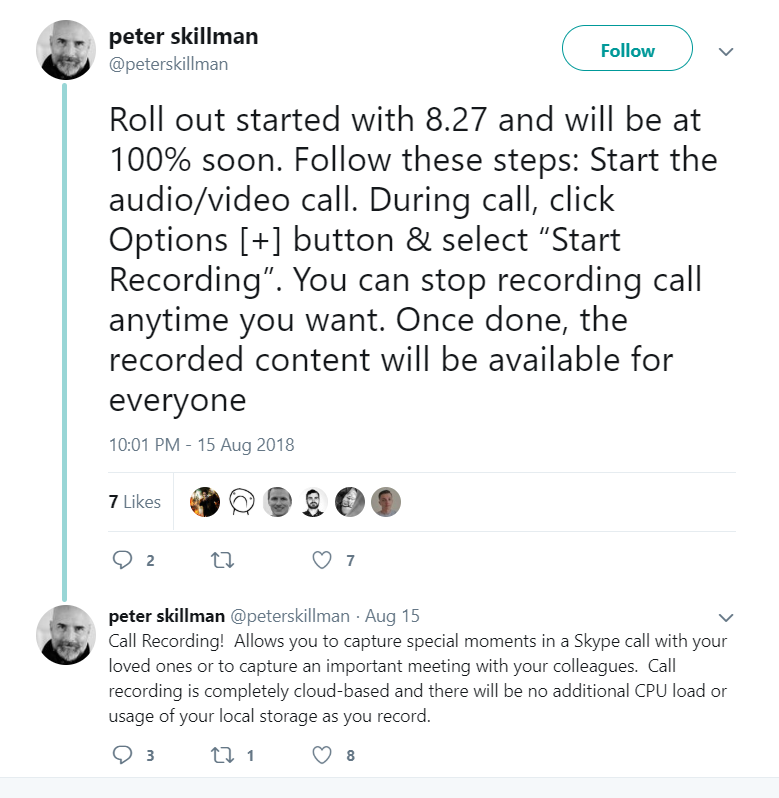 Download the release version of Skype and the Skype preview app from Google Play.

User will have to select the preview through Skype app’s settings menu.

5 reasons why iPhone Xs is a must buy

In Pics: Shah Rukh Khan and AbRam’s mini escapade to the...

Google admits that third-parties may have access to user emails

Patari receives another blow as the core team resigns

Keaton Jennings’ form continues as Notts get taste of their own...