Khyber Pakhtunkhwa (KP) police following its aim to maximize the security and safety of citizens of Peshawar has launched a mobile app that will ensure immediate help in case of any crime, reports Dawn News.

The app can be downloaded from the KP police website and the general public can use it in an event of burglary, theft, murder or even a road accident, according to the details.

The Inspector General Police (IGP) of KP province, Salahuddin Mehsud was also present at the launch event of the app. He said that “the app would reduce police response time and increase the level of coordination between police and the masses.” 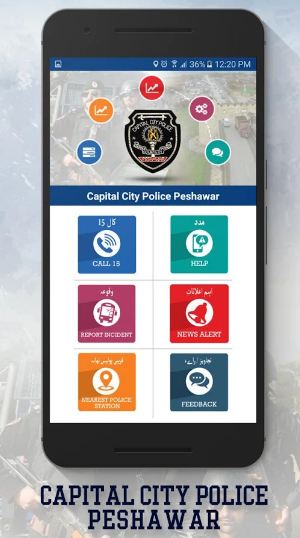 crime scene with the help of Google maps. The users in need will just have to tap a single option and the concerned police stations would be notified. Hence, the city patrol force would be able to reach the crime site immediately.

The app named “Peshawar Police” is currently available to install from Google Play store only available for Android smartphones. The app has various sections such as “Call 15” feature, “Report Incident” button and information about “Nearest Police Station”. But most importantly the “Help” option in the app will let you inform police instantly so they could aid you in case of danger.

In addition, a person has to register for the app by providing personal credentials in order to use the app. A mapping solution induced by Google Maps presents all locations of nearest police stations in your area. Pictures and videos of crimes and other incidents could also be shared with the police department with the help of this app.

Previously, we have seen that Islamabad police and even Punjab police have launched mobile apps to facilitate citizens in case of emergency. This rate of adopting cellular technology for aiding citizens shows that government’s security institutions are aware of the benefits of utilization of modern technology to combat crimes.

Xiaomi receives criticism for doubling down on ads display

Shahzad Khan - September 25, 2018
0
The fourth biggest smartphone maker in the world, Xiaomi took the world by storm when it launched Pocophone F1. A premium smartphone with a...

How our tech ecosystem is failing?

‘Never wanted to be Kapil Dev. Let me be Hardik Pandya’

A look into the Crypto-Exchange World