The IT sector has been neglected in Pakistan for many years. People have perceived the field of IT as a small industry despite the fact that Pakistan’s IT exports are worth over $2.5 billion and are expected to grow exponentially in the coming years. In recent times, however, IT industry has started gaining the recognition it rightfully deserves. The previous federal government approved the “Digital Pakistan” bill in the last week of its tenure. The said bill promised a series of incentives for IT producers, such as: 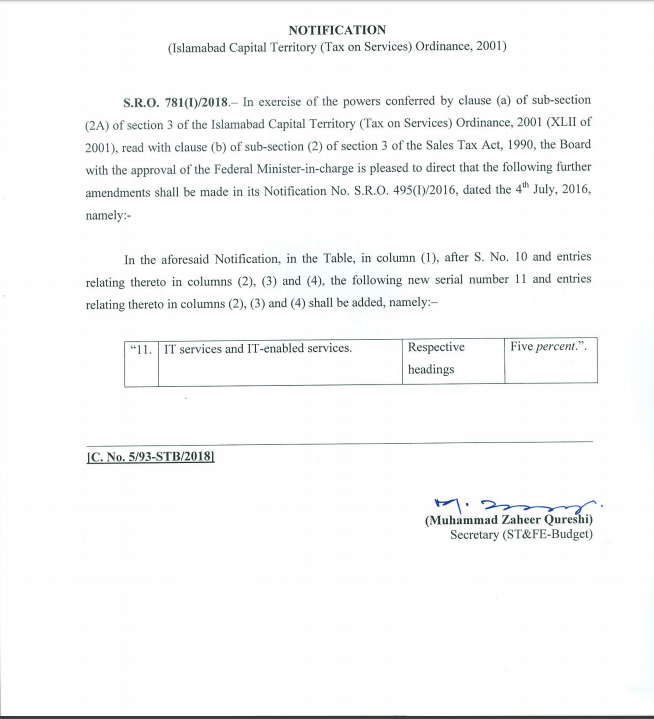 The Federal Minister of IT at that time, Ms Anusha Rahman said: “A lot more work needs to be done to keep up with technology, including amendments in rules of business, framework, and laws to take full benefits of technology for development and growth.”

As per the bill, sales tax on IT services was to be reduced to 5%. Accordingly, the Federal Board of Revenue (FBR) has issued a notification of the said amendment. As of now, all firms providing IT services in Federal Areas like Islamabad Capital Territory are subject to a sales tax of only 5%. It is hoped that upcoming provincial governments will follow suit by introducing similar measures and incentives for IT producers.

The Digital Pakistan Policy aims to encourage new startups in the IT industry. Additionally, it also aims to increase the industry’s output. Indefinitely, the policy can be vital in decreasing national unemployment and improving the country’s current account deficit.

The Chairman of P@SHA, Mr. Barkan Saeed greatly appreciated the last government’s efforts to promote the IT industry by saying “This SRO is based on the Digital Policy pushed tirelessly by Minister Anusha Rehman and the incentives announced by PM Shahid Khaqan Abbasi and will have a domino effect on our industry.”

Speaking on the matter, P@SHA’s Secretary General Shehryar Hydri said, “This SRO is the first step in normalizing taxes on IT services and is a good benchmark for other provinces to follow. A rational national policy will increase the tax revenue for federal and provincial tax authorities.”

These countries have shut down internet during exams to stop cheating

NADRA, Police and Telcos data being sold publicly on Facebook