LG has finally given official details regarding its upcoming flagship smartphone LG G7 ThinQ. The company confirmed earlier rumors that the phone will be called the LG G7 ThinQ. It will be officially announced in New York on 2nd May 2018. After months of rumors and leaks, the company gave out an official word about its flagship smartphone, as reported in the official Korea blog of LG.

The company has put a lot of emphasis on the smartphone’s AI features, specifically vision and voice AI. It is a very similar approach the company took with LG V30S ThinQ that was released at the start of the year and other ThinQ branded LG products along with the smartphone. The focus on AI lends a bit of credibility to rumors that suggest the phone would have a dedicated AI button.

LG also issued a statement regarding the upcoming flagship,

“ThinQ is a brand that reflects LG Electronics’ goal of ‘Thinking in the customer’s standpoint and practicing customer’s attention’.LG Electronics introduced the ThinQ brand on its smartphone for the first time last month, launching the LG V30S ThinQ, which combines AI technology with the features most frequently used by customers. The product is equipped with ‘Voice AI’ that performs various voice commands and ‘Empathy AI’ which focuses on ‘Vision AI’ which enhances the convenience of the camera.”

Ha Jeong-Wook, managing director of LG Electronics also added,
“Since smartphones have focused on filling new functions and more functions so far, it is time for us to find solutions to how convenient customers actually use them, We will show the convenience that we have not seen until now by concentrating the accumulated AI technology.” 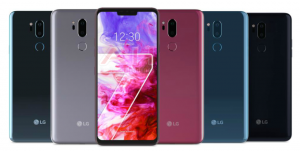 Are you excited about the upcoming LG G7 ThinQ? Let us know in the comments below.

‘A great person as well as a great cricketer’ – Graham...