In the past days, everyone has seen how Boney Kapoor’s family has come along and supported each other in days of happiness and sorrow. We were just not over with the lovely wish Arjun Kapoor has posted for half-sister Janhvi Kapoor before the trailer launch of her debut film Dhadak that the actress’ comment on Arjun Kapoor-Anshula’s selfies ha made us miss our siblings.

Arjun took to her social media account to share a monochrome selfie with her sister Anshula with the caption, “I think life’s just better in black and white!!! #blackandwhite !!! @anshulakapoor #lastday #londonsummer (sic).” While the fans were still gazing at the adorable bond between this brother-sister duo that Janhvi Kapoor also posted a funny comment on the picture. She wrote, “And when you’re on your way to get some nalli nihari (sic).” 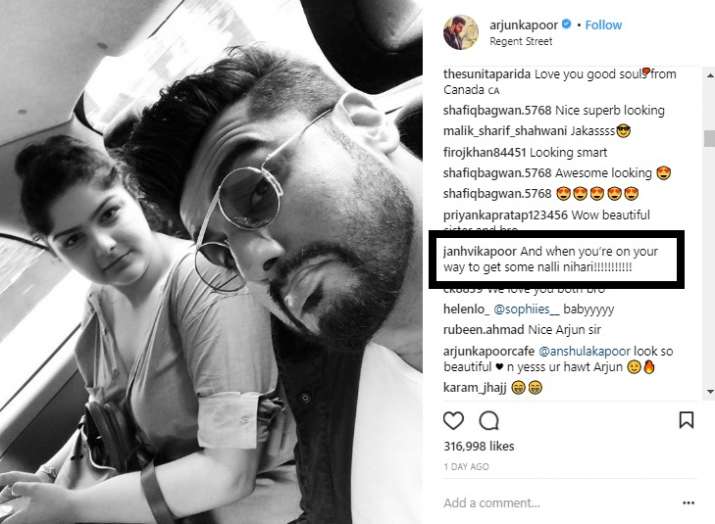 Arjun has shared the picture from the last day of his work-play trip in London, where he has been since a few days for the shoot of his upcoming film Namaste England. While Janhvi’s comment was making the netizens laugh, the newest member of the Kapoor family, Anand Ahuja, also joined in a and wrote, “#thetakeover (sic).”

Arjun, who couldn’t attend the trailer launch of Janhvi’s upcoming film Dhadak, sent warm wishes to Janhvi and her co-star Ishaan Khattar via Instagram post. He shared a poster of the movie as his Instagram story and wrote, “@janhvikapoor, today stars a new & beautiful journey! You are amazing and so is @ishaan95! Both of you are magical in the #Dhadaktrailer…Only love for you both! All the very best to the whole team… @karanjohar @shashankkhaitan (sic).”

A day before the trailer launch, Arjun even apologized to Janhvi for not being there in Mumbai for the event by posting a picture of himself, his father and his sisters on his Instagram account.

On the work front, Arjun’s next film is a romantic comedy titled Namaste England alongside Parineeti Chopra. Directed by Vipul Amrutlal Shah, the film is slated to release on October 1. Arjun and Parineeti are reuniting for a film after six years.

Irrfan Khan gets nostalgic; His new Twitter display picture is all about family time

Skype to get a call recording feature