Although we have all been hearing in news that the demand for Apple’s 10th-anniversary special smartphone wasn’t as big as expected, new reports suggest that the smartphone was the most sold smartphone in the first quarter of 2018.

The recent credible set of report comes from Business Insider which quotes estimates from IHS Markit. The chart, which lists the World’s most sold smartphones ranked in top 10, mentions that Apple has sold more than 12.7 million units of iPhone X smartphones in the first quarter of this year alone. 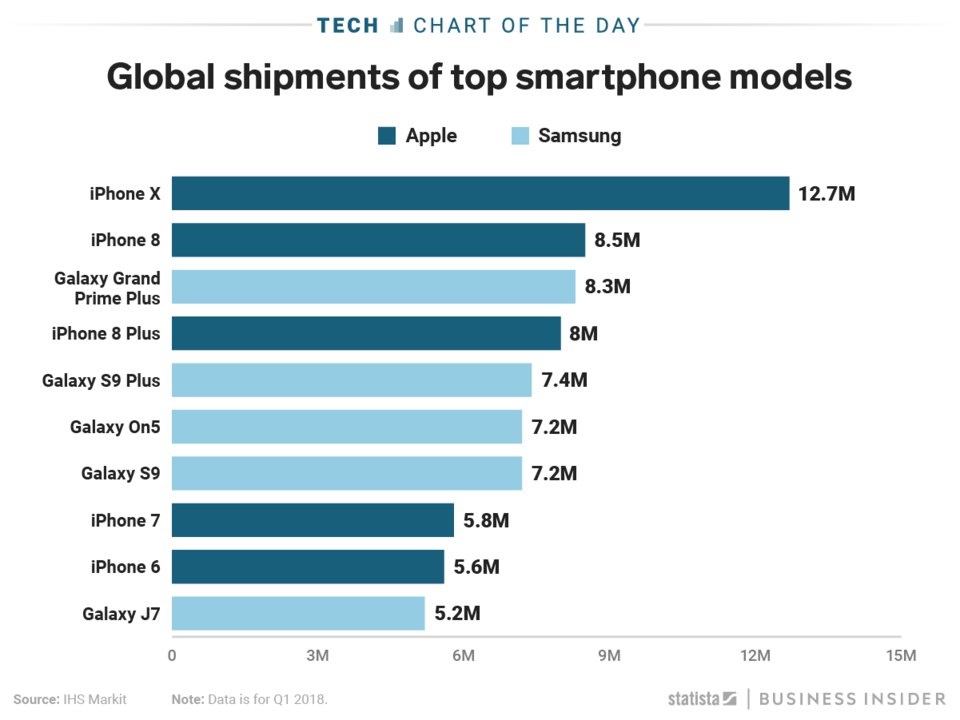 Although the number isn’t very comparable with the last year sales of iPhone 7 Plus (the then flagship), it is appreciable given the price of this smartphone was already very high. The figure also puts this smartphone ahead of all the other competitors by a significant margin. The second spot on the list also belonged to an iPhone, iPhone 8 which sold 8.5 million units. The first non-Apple smartphone came in at the third spot and it was Samsung Grand Prime.

Also Read: YouTuber finds a lost iPhone X in a river, returns it to owner

And yet again, the chart shows that big giants Samsung and Apple gulped the major share in the list of World’s most sold smartphones. 5 of the total 10 smartphones belonged to Samsung while the other five were Apple branded. Of the total of 75 million units that were sold in the first quarter, about 40.6 million units were sold by Apple while Samsung sold 35.3 million.

It has been a while since iPhone X came out in the markets, so it’s perfectly understandable that its popularity in terms of units being sold is on a decline. Many reports that quote month-on-month data are predicting that newer smartphones like S9 have already started taking over the podium.

Shahzad Khan - October 4, 2018
0
The coming November will witness the inevitable end of the famous Skype Classic (7.0) support. The original discontinuation of the Skype 7.0 version was...

Everything you need to know about the hack that shook Facebook...