The photo-sharing app, Instagram, would have been worth more than $100 billion if it was a standalone company, Bloomberg reported.

We all know that Instagram was purchased by Facebook in 2012 for $1billion and recently I reported that the app has crossed 1 billion monthly active users. Instagram has been capturing the attention of new users faster than Facebook’s main site and is expected to exceed 2 billion monthly users in the next five years. Instagram is still growing rapidly in the US, unlike Facebook. You can read the story posted on TechJuice that why do people are losing trust in Facebook.

Instagram could account for 16 per cent of Facebook’s revenue over the next year, up from 10.6 per cent in 2017.
Recently, Instagram also joined the league of YouTube by introducing its video hub, IGTV. With IGTV, the viewers would be able to watch hour-long videos from different content creators they would be following. Speaking of which, the followed accounts on Instagram would automatically get followed on the new service. Moreover, the users would have various sections to browse like ‘For You,’ ‘Following,’ ‘Popular’ and ‘Continue Watching.’ 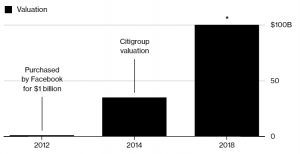 The report has been generated by Bloomberg’s data intelligence platform.