Huawei recently released the P20 and P20 Pro, the first smartphones with not two, but three back cameras! This shows how technologically driven Huawei is, constantly on the lookout to innovate and bring new features to the market. Well, looks like Huawei is passionate to prove its technological might once again, this time with the introduction of the world’s first “foldable” phone. 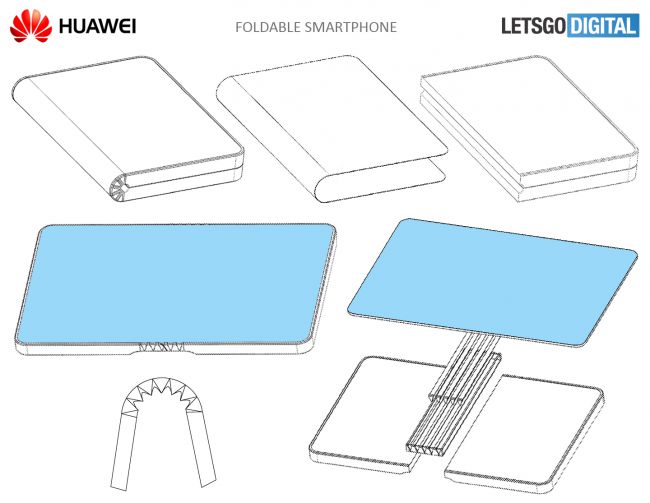 A patent has been uncovered by LetsGoDigital, a Dutch publication, which details Huawei’s idea of a foldable smartphone. The figure shows a smartphone with a connecting platform of a sort in the middle that folds up to a full 90 degree on both sides. The need for a folding phone arose when consumers started demanding large screens paired with easy portability. One of the easiest methods of fulfilling this demand was to make a foldable phone that can be used as a phablet during normal usage and be placed in a pocket after being folded.

There is no clear indication as to when the mobile will be available to the public but industry experts are forecasting a neck-to-neck race between the top 3 manufacturers, i.e. Samsung, Apple, and Huawei.

Huawei is the third largest smartphone manufacturer in the world. Most of its products lie between the mid and the high-range, putting the firm in direct competition with other industry leaders such as Samsung and Apple.

Although Huawei’s patent makes it seem like the future is near, the idea is solely on paper. No news of a physical prototype has been received yet. This paired with the fact that experts predict a very low durability rate of such foldable displays might prove as a huge hurdle in the path of Huawei.

In other news, Samsung has not confirmed anything regarding the Galaxy X, whose patent was filed at the end of last year. The Galaxy X was also rumored to have a foldable design. Alas, we still have to make do with straight, simple phones. What a pity, right?

Newlyweds Neha Dhupia and Angad Bedi are ‘not on honeymoon’, actress...

Shahzad Khan - May 15, 2018
0
Newlyweds Neha Dhupia and Angad Bedi are ‘not on honeymoon’, actress confirms with picture! Photo:INSTAGRAM Bollywood actress Neha Dhupia got hitched to...

Here’s everything to expect from Google

Electricity restored in 70% of Lahore, LESCO

Rossouw hundred sets up Hampshire’s route to the title