Facebook Messenger may soon be getting the anticipated remove/unsend message. In simple words, the users will soon be able to take back what they have sent on Facebook Messenger. The feature will work exactly how the delete message work for WhatsApp application.

WhatsApp users are able to delete the sent messages from both sides after the messages are delivered.

It was recently revealed that the CEO of Facebook, Mark Zuckerberg, and other Facebook executives have already been using this feature for a long time. According to TechCrunch, Facebook’s executive team had the option to retract (unsend) messages and were using it quite often while not releasing the same feature for the public. Once the news got leaked, Mark Zuckerberg received a lot backlash from the public.

Feature finally arriving for the public:

Screenshots shared by Jane Manchun Wong, first spotted by TechCrunch, from the Messenger app for Android reveal that the company is making progress on adding the new feature for all of its users. The option is still not available to everyone, in fact only a handful of users have experienced this feature as of now. 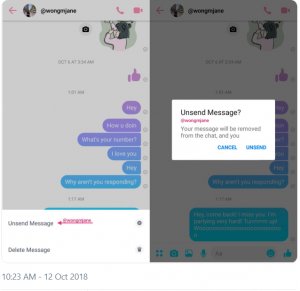 At the moment, the messenger app doesn’t give you that option, if a user wants to delete a message, the message will only disappear from their inbox, the recipient can still see the message. However, this new ‘Unsend Message’ feature will let the user delete their message from both inboxes, it should be noted that there is a certain time limit for this option i.e. the user would be allowed to take their message back for only a set amount of time. So users will not be able to unsend it if the recipient has seen it or a certain time frame has passed. So, basically, this feature follows the same principles of the ‘delete message for everyone’ option in WhatsApp.

Facebook initially announced that it would be adding the “unsend” feature for everyone in April after it was revealed that messages CEO Mark Zuckerberg had sent to other users were removed from the users’ inboxes while older messages that those users sent Zuckerberg were still there. This isn’t the first time Facebook breached its user’s trust. Just weeks ago, Facebook revealed a security flaw which led to probable information theft of almost 50M Facebook users, the figure was later revised to be 30M.

As a result of this flaw, the attackers made off with sensitive personal information – such as email addresses, phone numbers and location history – from nearly half of those users that could put them at serious risk. Facebook has been in a mess for the longest time, Cambridge Analytica scandal, conflict of Mark Zuckerberg with the founders of Instagram and WhatsApp, their resignations from the company — all of it has created a PR mess for the social platform. To add to the misery, users are flocking away from Facebook and preferring niche social networks like Twitter, WhatsApp, Instagram, SnapChat etc for connecting with their friends. Let’s see if Facebook will be able to bounce back with the new addition of features to the messenger app.

Shahzad Khan - June 5, 2018
0
Telenor Pakistan has, once again, gone a step ahead in bringing the world-class gaming experience to the Pakistani populace.In its efforts to make the...

Samsung launches Galaxy J6, J4, A6 and A6+ in Pakistan

It is all different: Akshay Kumar on comparing Gold with Chak...

Beyond The Clouds: 5 reasons to watch Majid Majidi’s Bollywood offering

International Happiness Day: 10 Bollywood celebs who slay with their million-dollar...