Cambridge Analytica has shut down following allegations about its misuse of Facebook data and the campaign strategies it pitched to its clients. It was revealed that more than 80 million Facebook accounts were breached by the data analytics company. During a conference call today with the tech firm’s employees, chairman Julian Wheatland of Cambridge Analytica’s parent company SCL Group announced the news. Its founder Nigel Oakes said that SCL Group is closing down too.

Cambridge Analytica itself issued a press release announcing it and that the parent company SCL would also stop operating, and would begin bankruptcy proceedings. The press release further elaborates that rebranding Cambridge Analytica was “futile.” The loss of reputation and clients was too costly for the company to bear. All the workers were advised to return their keycards immediately.

The UK-based company Cambridge Analytica has been struggling for quite some time to emerge from under the scandal, but reports and inquiries kept coming in, expanding the firm’s privacy sins. Cambridge Analytica got their hands on illegally attained data through an app written by a university researcher. 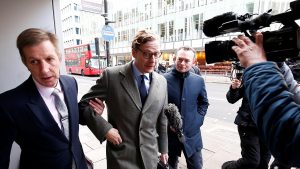 While only 270,000 Facebook users installed the app, the app was able to gather data on millions of their friends due to the Facebook data sharing policy at that time. Although, Facebook is now deploying safeguards to protect user data in the past couple of days by putting an end to targetted ads using emails attained without consent and no more allows third-party applications to access user data.

It’s hard to argue with SCL Group’s decision to deem the firm beyond salvaging as the combined evidence of suspended CA CEO Alexander Nix’s blackmail tactics and the eventual hearing before Congress along with the involvement in Trump campaign.

The press release says that the company maintained its innocence and “has been vilified for activities that are not only legal but also widely accepted as a standard component of online advertising in both the political and commercial arenas.”

Although the company was internally investigating the allegations itself and they argued that the allegations weren’t factually supported, the “siege of media coverage has driven away virtually all of the Company’s customers and suppliers,” necessitating a shutdown.

WhatsApp rolls out a new feature for group chats

Munro, Dwayne Bravo make it four in a row for Trinbago...

Samsung Galaxy S10 Plus variant to have 5G connectivity

This is why you shouldn’t use your smartphone at night

Why Careem is increasingly becoming a spam

Google fails to keep Pixel 3 XL a secret as it...

This concept video shows how the new iPhones will look like