BlackBerry, these days, seems to be on the hunt for the social media services. Previously, it filed a lawsuit against Facebook, Whatsapp, and Instagram over infringing its messaging app patents. Now, the company has one more social platform on its roster, Snapchat, with the similar kind of accusation.

BlackBerry has blamed Snapchat for also infringing its patented messaging technology along with some other patents that include map improvements, advertising methods, and UI enhancement for the mobile devices.

For the messaging patent, the company claims that “display of timestamps in a messaging user interface that provides users with appropriate temporal context for their communications,” is actually BlackBerry’s invention and therefore, it has been infringed by the charged media platforms.

Not just that, but the notifications count that is displayed on the apps’ icons in red circles, is also being claimed to be BlackBerry’s innovation. 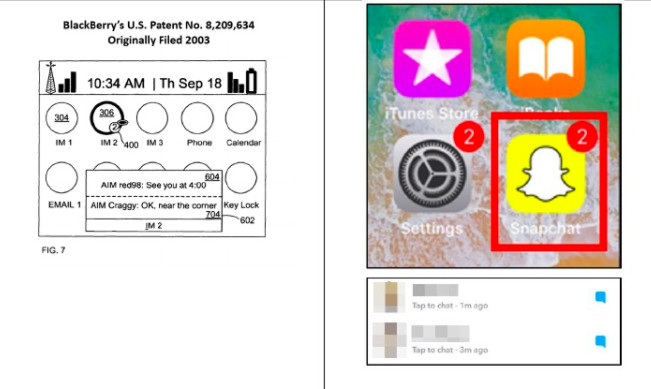 Moving on, according to BlackBerry, the idea of Snap Map – an interactive map showing you which other devices are in the area, and a color gradient to show information about the level and density of documenting activity – was also first introduced by itself through a patent.

With these accusations, BlackBerry states that Snapchat has used the company’s intellectual property for its own gain and has diverted the users from BlackBerry to Snapchat. It has given the accused firm “a substantial and undeserved windfall”.

The complaint states, “It (BlackBerry) has been communicating with Defendant (Snap) for over a year regarding its patent portfolio, including various letters, calls and an in-person meeting. Through this suit, BlackBerry seeks redress for the harm caused by Defendant’s unlawful use of BlackBerry’s intellectual property.”

BlackBerry communicated to The Verge saying, “We believe there are far more opportunities for partnership than disagreement.” It added, “While we continue to hold this door open, we also have a strong claim that Snap infringed on our intellectual property, harmed our shareholders, and we have an obligation to pursue appropriate legal remedies.”

And these legal remedies could be attorney’s fees or even the “destruction and recall of infringing products and materials.”

Let us know what you think of BlackBerry’s lawsuit. For more on the technology, keep following TechJuice.

Mobile and internet shutdowns to be tracked in Elections 2018 by...