Huawei, the world’s third-largest smartphone manufacturer has been making mobile phones since 1997. The Chinese tech giant is best known for creating significant impact in the mobile industry with its economical handsets. Since the start of 2018, Huawei has launched various mid-range devices comprising of edge-to-edge displays and brought these fancy looking displays down to budget phones. The company’s dedication to bringing the best technology at lower prices than its competitors is doing the same with it’s newest offering — Huawei Y9 (2018).

Huawei Y9 (2018) is priced at 25,000 PKR. The smartphone features a narrow bezel FHD+ screen and is ready to make an impression on the budget smartphone category in Pakistan. Let’s take a look at how the phone performs in regards to its amazing price tag. 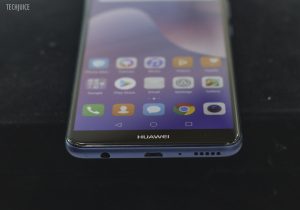 Huawei Y9 (2018) gives a pretty amazing look at first glance. It features build quality and the moment you lay hands on this phone, you will know it is a flagship phone that you are holding. With its 5.93 inches tall and 18:9 aspect ratio bezel-less display, it is much similar to the challenging budget smartphone Huawei Y7 (2018). 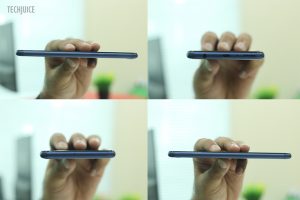 The smartphone’s front portion is pretty simple with Huawei branding at the bottom. The device looks super sleek and is fairly manageable in the hand. The back of the device is a complete aluminum slab with a shiny line on the upper and lower part of the smartphone. This gives Y9 Prime (2018) the flagship feel found in the budget smartphone genre.

The four cameras are placed at the top corner of the rear on the phone with fingerprint sensor lying on the back, in the central upper part. It’s not common to see a device so sleek and featuring a smart piece of hardware in this price range. 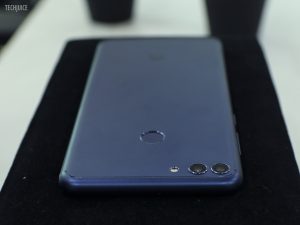 The placement of buttons is pretty standard for Huawei Y9 (2018). Using the buttons, I could easily say they are tactile and easy to reach with the narrow frame of the device. The power button is on the right side and the volume buttons are above the power button of the device. 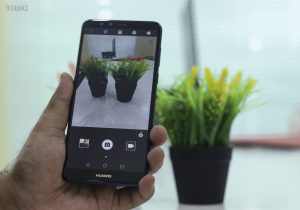 Huawei Y9 (2018) has an unmatched display looking at the price of the smartphone. A beautiful 1080p display with 18:9 ratio is one of the main attractions of this smartphone. The smartphone emits a bezel-less look at the first glance. Since most of the phones in this budget are not even close to the looks of it.

Huawei is touting the 4 cameras of Huawei Y9 (2018) in this price range, and frankly, Huawei does get boasting rights for the camera of this device after managing to install dual camera setups on the front and back of this amazing device.

Since there are four cameras, the portrait mode on the front and back both work fine most of the time depending on good lighting conditions. Although, it does make a mess of edges if there is not a lot of light present between the object and the background. 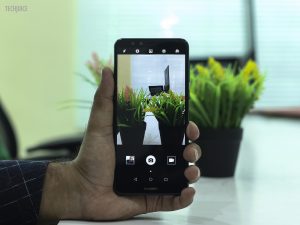 The quality of pictures taken from both the front and back camera certainly live up to the expectations with good contrast and fast focus. The camera doesn’t seem to add much noise after the picture has been taken. The pictures seem were pretty good when taken in most conditions.

Huawei Y9 (2018) comes with Android 8.0 based on EMUI 8.0 out of the box. Huawei’s in-house built EMUI 8.0 is a very simple and lean version of the Android skin. The company claims to be much lighter than other skins and the performance gains from the older versions of Huawei’s skins are clearly visible in day to day uses. Although there is some lag when sifting through multitasking view or opening new applications.

The Mali-T830 MP2 GPU is adequate and runs most mid-level 3D games without any hiccups or issues. Although, there were no visible lag or performance hits while carrying out day to day tasks like opening/closing applications but we noticed it getting slower when multitasking a few tasks in the background.

The benchmarks showed similar results with the scores lying in the middle of the spectrum. The Benchmarking results from Geekbench 4 application show better scores than some of the old flagships of Samsung. Screenshots are attached below;

It features a 4,000mAh battery which provides a 2-day battery life. I loved the smartphone’s battery the most since it provided enough power to easily get through 2 days depending on your usage and I never experienced the smartphone dying before putting it on charge at the end of the 2nd day.

Huawei introduced the Huawei Mate 10 lite at the price of mid-range smartphones and now the company has gone an extra mile with Huawei Y9 (2018). It’s asking price of nearly 25,000 PKR for this beautiful piece of hardware.

The smartphone features the almost the same specs found in Huawei Mate 10 Lite such as 4 cameras and 18:9 ratio. So when you go out to buy a smartphone, the most important things is measuring how much value does it provide for your money.

If the smartphone is perfect in every sense and still costs way more than it should, it won’t be an intelligent purchase. With Huawei Y9 (2018), you get good performance, a beautiful looking display, impressive design and four cameras. If you are looking for a smartphone with a decent camera and big screen which is still manageable in the hand, Huawei Y9 (2018) might be the phone to look out for when you are in the market to get a new device.

These are the two new mind-blowing colors for Galaxy S9 and...